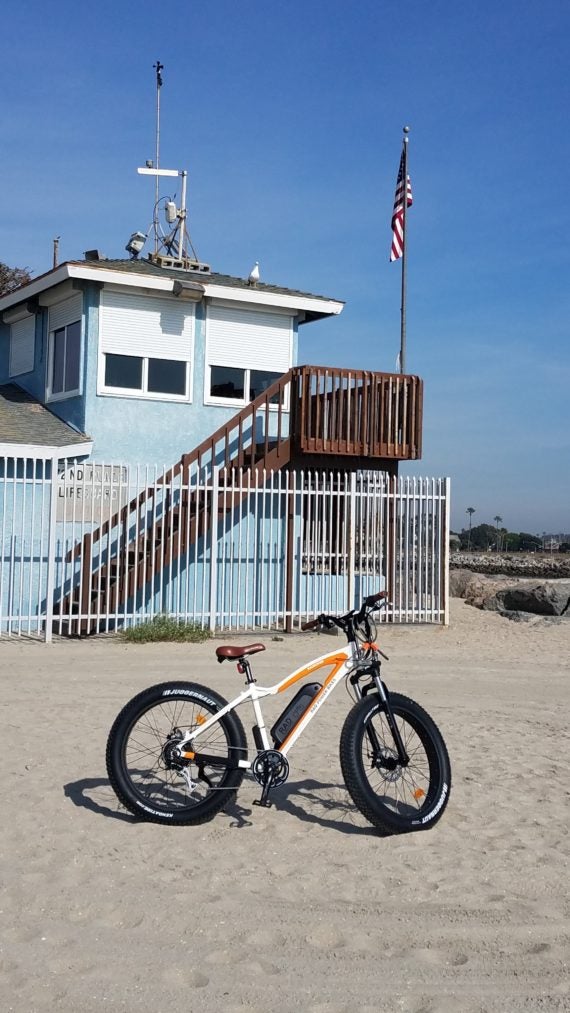 The first time Rad Power Bikes contacted us, we almost scoffed them off. Rad? Seriously? You need to be pretty rad to use a name like that. And when we put together the pre-assembled kit that came in a big box, we knew we were in for something different. This didn’t look like your average electric bicycle (e-bike).

The Rad Rover is impressive, and in a way the Godzilla of the e-bike world. We just finished our previous test ride of Propella small light e-bike with its razor-thin tires that cut through downtown traffic, and now are transitioning to fat tires. So the question was, how “rad” is the Rad Rover? Does it have enough power to make those fat tires feel like child play or is it all potential? We found the Rad Rover to be plain silly fun in the end.

The Rad Rover Fat Tire Test Ride Is A BLAST! Seriously now, that is one impressive e-bike! It’s big. 66.5 lb big. Did we mention that it’s big? The Rad Rover from Rad Power Bikes towers over our other e-bikes. In the four-wheel electric vehicle (EV) world, it would be a Tesla Model X P100D. It’s an SUV e-bike on steroids, so imagine one of the top SUVs out there. And that is something we would have never considered previously. Once we got on that big e-bike, our initial perspective on it changed. Free to enjoy it without preconceived notions, those big tires are gripping well on our streets.

Seriously, we would never think of designing or even riding such a big e-bike. A tad on the heavy side, pedaling isn’t difficult and getting going in higher gears is very possible. But turn on the electric motor, and the Rad Rover gets moving quickly. With 5 e-assist riding modes, level 1 gets you going with enough power to make you move and get your bearings. As you move up the levels, the motor finally unleashes all of its watts, all 750 of them.

The fun starts in 3rd, 4th, and 5th e-assist mode. All the sudden the peaceful gentle giant lurches forward and brings you progressively up to 20 MPH, bringing along your adrenaline for fun.

Those fat tires give the Rad Rover an extra element of softness. 20 psi is the perfect medium for a cushioned, yet stiffer ride. Comfort is assured via a Velo seat that does the job well. The front rides on a suspension fork.

The 750 W Bafang motor seems disproportionally small for such a big e-bike. But it more than makes up for the weight of the bike. Speaking of which, its full payload is 275 lbs. You can actually haul things around with this e-bike. We could feasibly do a light grocery run with it and a backpack or install a trailer behind it. And just for fun, the Rad Rover has a cruise control, although we haven’t figured that one out yet.

Although it’s big and on the heavy side, it feels sharp despite its fat wheels. In the end, we’ve had a hard time leaving it alone. It just wants to be kept riding. The attention to details is the cherry on top of a well made up cake. The handrests are made out of sturdy leather that matches the seat color. You can pedal the Rad Rover, but the weight catches up with you. Although a good workout without it, the generous electric motor is too tempting. Easily reaching and maintaining 20 MPH is a great way to take it further than you would a normal e-bike. It’s an e-bike we’ve learned to love to ride. It’s a lot of fun and we now consider it the happy e-bike. We went from downtown Long Beach, California east on the beach path. After meandering our ways through the streets, we easily put over 20 miles on it in an afternoon. In fact, in two days, we put 40 miles on the brand new bike, enjoying each and every one of them. It’s just that much fun.

You really climb onboard the Rad Rover. As imposing as it is, it makes you feel you’re on top of the game sitting high. After a minute of riding, we found that the fat tires grab and grip the road very well.

The final product is imposing and looks good. The attention to details is refreshing, with a nice handlebar leather touch that just looks good. Although imposing, it is comfortable enough for long distance fat tire riding. Maybe it’s a little closer to an electric scooter or a very tiny electric motorcycle but compared to our last ride of razor-thin small tires, those fat tires are as far opposite as can be! What’s Up With The Fat Tire Fad?

Fat tires are fun, but you have to pedal. E-bikes help continue that phase with capable electric motors. And for everyday use, they are a lot of fun with a good bite and grab.

One thing is for certain, Rad Power Bikes can claim the word “rad” with its Rad Rover. In some ways, the Rad Rover feels closer to an electric moped than an e-bike, but it is just as capable in a diversified way. It is a complete hoot to ride. Our second thought of the day is, let’s go out and ride the Rad! It’s just that much fun. Nicolas Zart Nicolas was born and raised around classic cars of the 1920s, but it wasn’t until he drove an AC Propulsion eBox and a Tesla Roadster that the light went on. Ever since he has produced green mobility content on various CleanTech outlets since 2007 and found his home on CleanTechnica.

His communication passion led to cover electric vehicles, autonomous vehicles, renewable energy, test drives, podcasts, shoot pictures, and film for various international outlets in print and online. Nicolas offers an in-depth look at the e-mobility world through interviews and the many contacts he has forged in those industries.

His favorite taglines are: “There are more solutions than obstacles.” and “Yesterday’s Future Now”