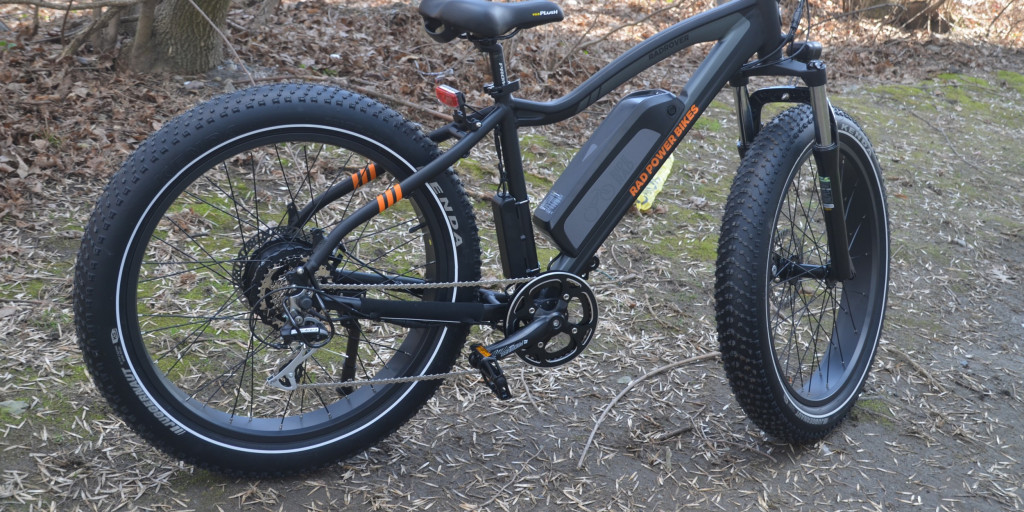 Fat-tire electric bicycles, which feature almost comically large extra-wide tires, can be a blast to ride. The wide tires make you feel like you’re riding on a cushion of air. They also allow riders to traverse terrain such as deep sand and snow that would otherwise be nearly impossible on a typical mountain bike. But the problem with fat tire e-bikes its that the good ones are expensive and the cheap ones are, well, cheap.

That’s why I’m so excited by the RadRover fat tire electric bike from Rad Power Bikes. I believe we’ve finally found a goldilocks fat e-bike with a price point and level of quality that is juuuust right.

Who are Rad Power Bikes?

If you aren’t familiar with Rad Power Bikes, they are perhaps one of the fastest growing electric bicycle companies in the US.

Instead of investing in a nationwide dealer network, they’ve built a direct-to-consumer model and cut out the middleman. They do almost all of their sales online, and maintain only a select few retail locations.

While that means it’s harder to find a bike to test ride, you can ultimately get a better quality e-bike for less cash.

And it comes delivered right to your door.

I wanted to try this out for myself, especially since I’ve been itching to find a good electric fat tire bike, and the RadRover presents itself like the perfect option. 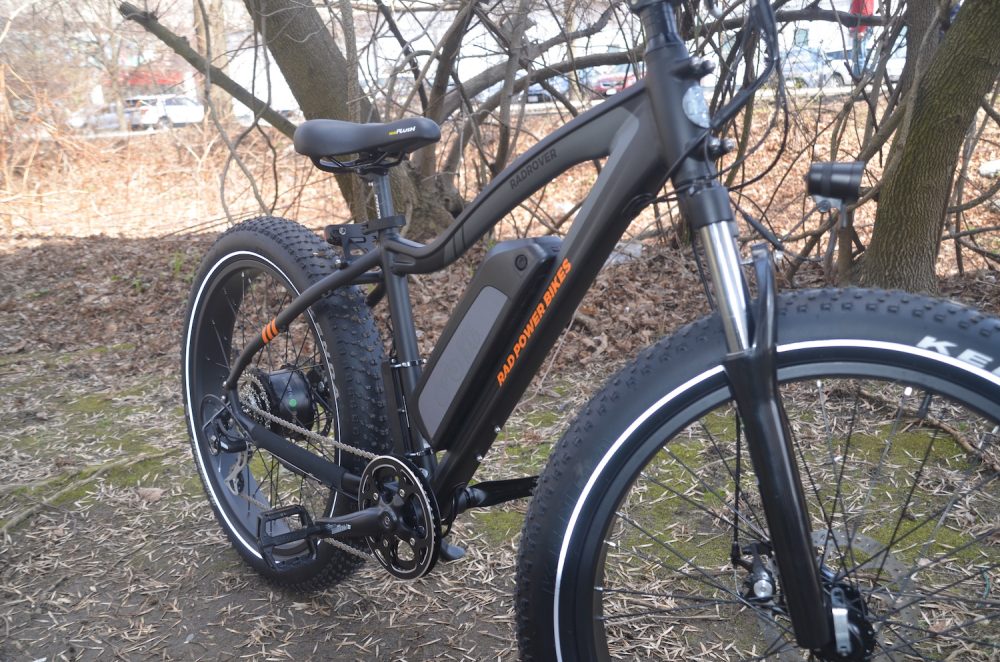 Check out my video review of the RadRover below, then read on for my full written thoughts. 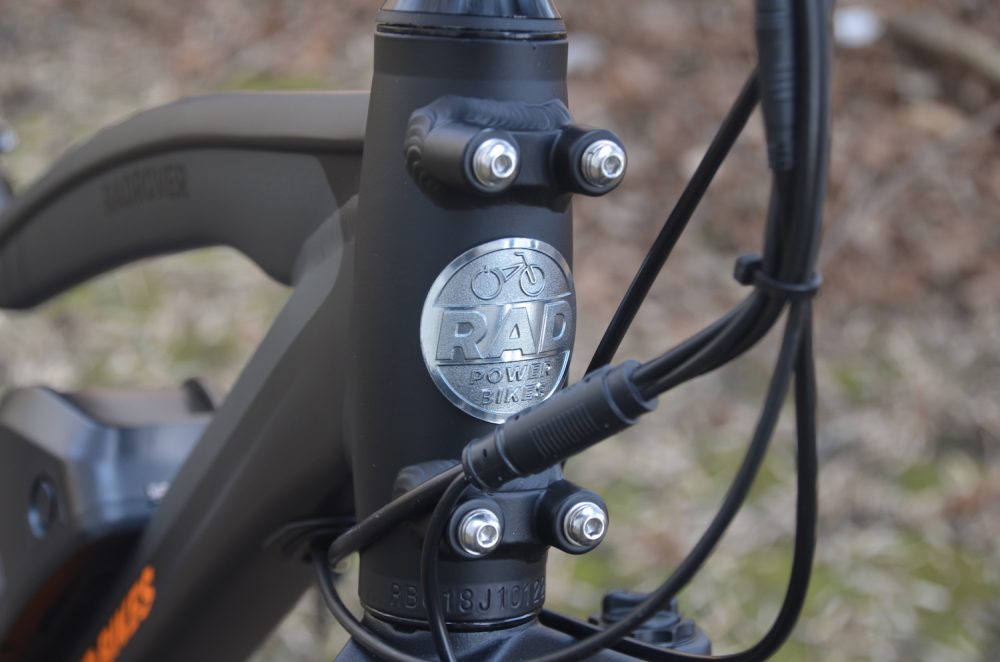 The RadRover is a combination of a nice design and good electrical components, though I’d argue the bicycle components are just decent. For that reason, I’d rate the quality of the bike separately. In terms of an e-bike, I’d say the ‘e’ part is good quality. For the ‘bike’ part, I’d go with medium quality.

The motor is strong and makes only a small amount of noise — nothing you can’t live with. Direct drive motors are always going to be more quiet than this geared motor, but the gear sound isn’t overwhelming. Most importantly the motor works well and pulls you right off the line. 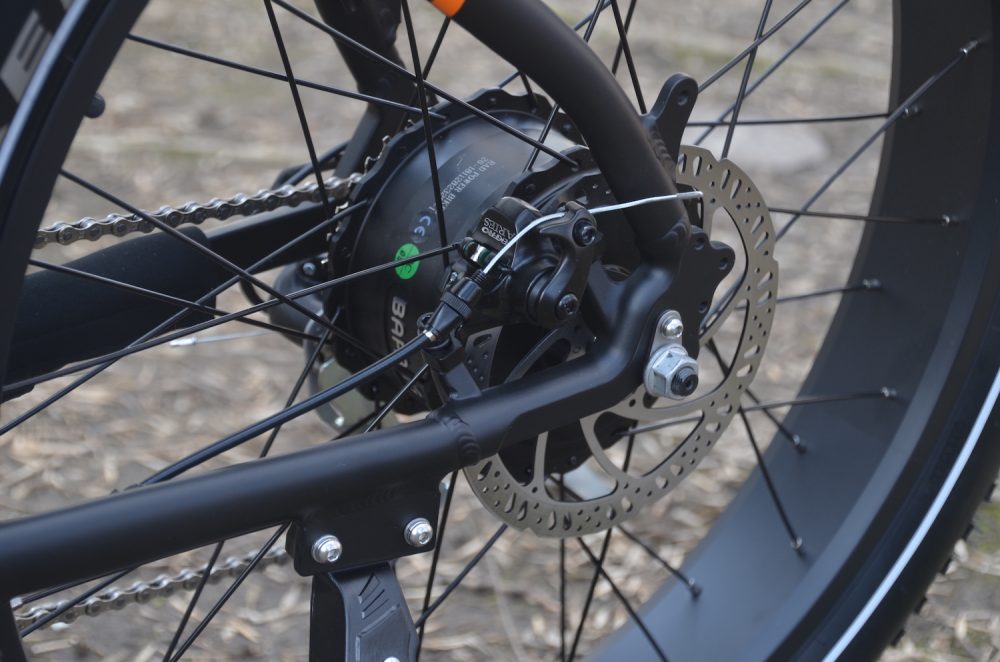 While some people might prefer a mid-drive motor, keep in mind that you’re talking at least $1,000 more for a mid-drive electric fat bike. The whole point of the RadRover is that it’s affordable, and the rear hub motor is a great choice here.

I’ve only had the RadRover for a couple weeks, so I can’t really say anything about the longevity of the battery. However, it uses Samsung 35E 18650 battery cells, which are high quality and high capacity cells. I happen to know a thing or two about building batteries (on account of writing a book on the subject) and I can confirm that these are top notch battery cells. They are generally used when capacity is more important than power. But with enough cells in parallel, they can put out excellent power while keeping battery size and weight minimal.

It’s when we get to the actual bike that the quality takes a bit of a hit. Again, nothing here is bad, it’s just not impressive.

We’re talking Tektro mechanical disc brakes, which are fine. They are Tektro’s entry-level brakes, but they work well.

There’s also a Shimano Acera derailleur on the drivetrain, which is also fine — just another entry-level component.

The RST spring fork is more of the same — fine for what we’re doing here, which is building an affordable but reliable e-bike.

None of these parts are high end, but they all come from respected brands and are designed to work. You might have to fiddle with your brakes or shifters on occasion to tune them, and you aren’t going to be saving any precious grams with these parts, but you weren’t really worried about weight when you bought a fat bike anyways.

One component that I think is actually really good is the saddle. It’s wide, plush and super comfortable. Lycra-lovers will probably complain that it’s too large to provide the most efficient pedaling movement. But get real! We threw efficiency out the window when we chose tires wider than our calves.

It also has a grab handle built into the back of the saddle, which is great for maneuvering the bike around in tight quarters like an elevator in your building or a garage. 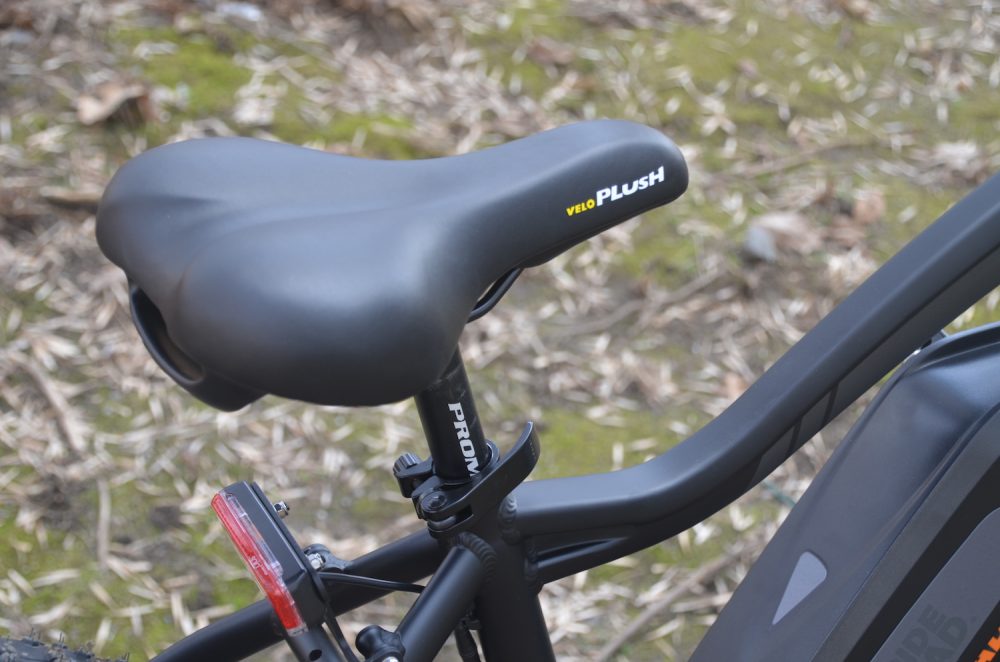 An added touch that I really like are the included lights. They are plenty bright and run off the main pack. Plus you can turn them on without reaching down — just hold the Mode and Up button at the same time. The front light even has an ambient light sensor so it can turn on automatically at night. And when you pull the brake levers, the rear light illuminates even brighter, functioning like a brake light in addition to a standard tail light.

The tail light also has a blinky option, though personally I’m anti-blink. I know cyclists think it makes them stand out more — and it probably does — but nothing causes target fixation better than a blinking light.

The frame itself is actually quite nice. Its 6061 aluminum and has mounting points for a whole pile of bolt-on accessories. Rad Power Bikes has many different styles of racks, fenders bench seats and other accessories that are all designed to mount easily to the bike. And when the base model is this affordable, that leaves room for adding some nice accessories.

So while I’m not blown away by the quality of the RadRover, I’d say I’m impressed with how well they’ve done for the price. Obviously it’s not going to have the high-end parts of bikes twice its price, but it’s not aiming for that market either.

How well does it perform?

Here’s where the RadRover really shines: it’s just a blast to ride!

With its big 4.5″ tires, it can climb over anything. I love transitioning seamlessly from asphalt to grass and dirt, then back to the street. On any other bike that would be a jarring exercise, but on the RadRover I just laugh and aim for the pot holes. Then I hop a curb and ride straight down the middle of the grassy park — paved trails be damned!

The front suspension fork and big big tires contribute to making the ride so nice on a variety of terrains, even without rear suspension.

I was a bit worried that handling would suffer with such big (and heavy) tires, but I was surprised by how nimble the bike was. Obviously it’s not going to compare to a gravel e-bike with tires the size of your thumb. But I took the RadRover on some single track and found that the bike could hop and flick around turns with a level of ease that betrayed its generous size.

Taking it back into my apartment afterwards reminded me of how large the RadRover is. As nimble as the bike feels while riding it, negotiating elevators and hallways is still a bit of a challenge. That seat handle helped, but I’m still jealous of anyone with a garage to keep this bike in.

But let’s not worry about that — I spent a lot more time riding than I spent maneuvering the bike past my couch. And riding is where the bike excels. To be fair, I didn’t do a whole lot of pedaling. I’m a bit lazy and that half-twist throttle is tempting. I found myself riding the RadRover more like a motocross bike most of the time. But when I could muster some self control, I switched into pedal assist mode and got some exercise. 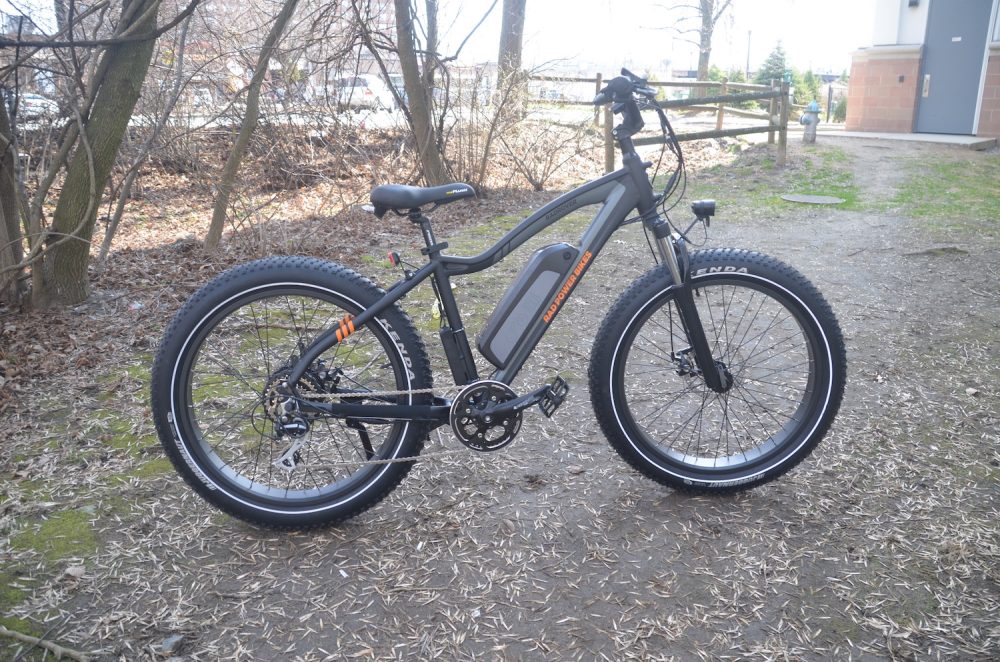 On the higher pedal assist levels (there are five total), pedaling is a breeze. If you really want a workout though, put it in level 1. The same big wheels and tires that make this bike so much fun also make it harder to pedal without electrical assist. I never ran out of battery, but if I ever do then I really hope I’m at a higher elevation than at home. I wouldn’t want to pedal this bike up hill for too long without the e-assist. But with over 600 Wh of battery, you should have plenty of charge for an afternoon of fun.

The one thing that bugged me about the riding experience is the 32 km/h (20 mph) limit on the motor. It’s fine that it’s there, and it keeps the bike in the Class 2 designation. But the limit comes on kind of suddenly. When you grab a handful of throttle, you rocket towards 20 mph. But when you hit the limit, you can feel the power suddenly cut out. I’d rather see it begin to ease off at around 18 mph and reduce towards 20 mph. That way you don’t feel the sudden loss of acceleration.

The good news is that this only really happens on throttle acceleration — things go smoother on pedal assist. And it’s not really a problem, it’s just something that I feel could be made a tad more comfortable. And ironically it’s probably caused by the motor being so powerful. If the motor was weaker, I wouldn’t notice as much when it cuts out. But I also wouldn’t be speaking so highly of this bike if it had a weaker motor either. So I’d rather have a more noticeable power cutout at 20 mph than spend too long struggling to reach that speed. 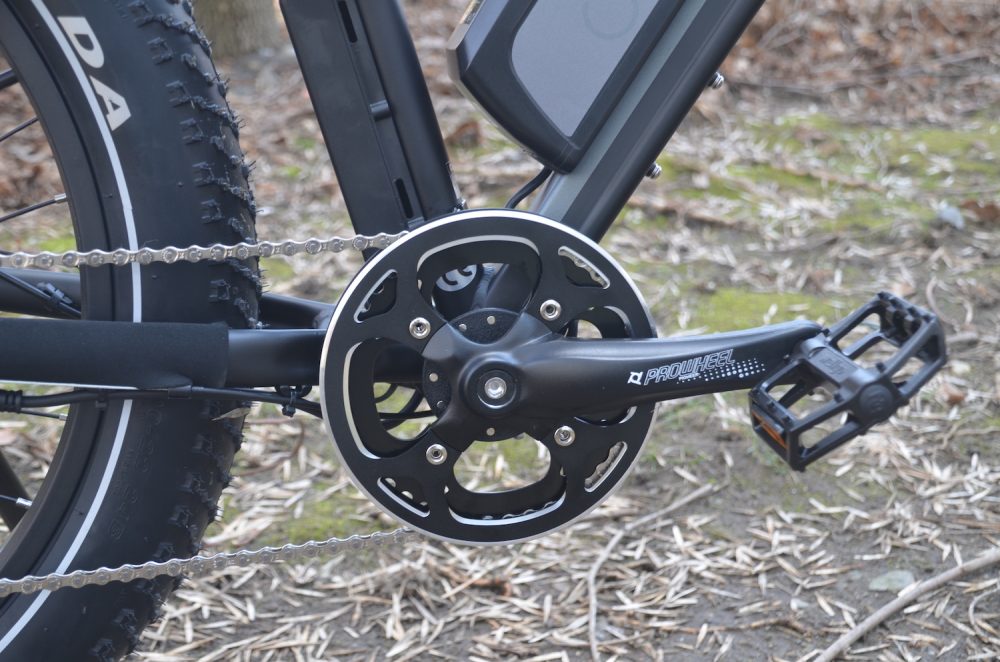 I’m definitely a fan of the RadRover and I’m glad I finally got a chance to try it. This bike reminds me of why I started riding e-bikes to begin with: they’re just so much fun.

When you can ride just as well in the bike lane or over pea gravel, the whole world becomes your bike path. With those big tires, the RadRover can tackle just about anything. Hell, there’s so much air in those tires that it might even float… not that I recommend trying that. The battery has a 1-year warranty but it doesn’t cover water damage.

But as long as you stick to (mostly) dry land, the RadRover should be able to handle any trail you can find. It’s a comfortable bike with components that are all in the “good enough” sweet spot without jacking up the price too high. Sure, you could try your hand at building your own electric fat bike to save some money. But if you prefer having a reputable company to deal with and a warranty to rely on, then this is an excellent bike to have some real fun on for just $1,499.