Editor’s Note: Although this was written years ago, most of this information still applies. 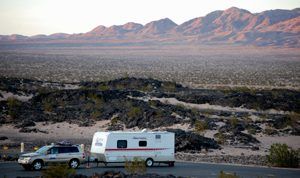 Boondocking is not really a good term, but has somehow come into common use. Dry Camping (parking anywhere without or with limited amenities) is more accurate. Independent Parking is the preferred term. It means that you are prepared to dry camp but, make use of amenities when they’re available. Being prepared to live independently is what it’s all about, then you’re free to do what you want to do.

In general, the secret is to do it with Discretion. This is Rule #1 to successful boondockin g no matter where you do it. This means, when overnighting, you blend in and don’t call attention to yourself. No awnings, lawn chairs and such in rest areas and malls. Sometimes you need to be sneaky, sometimes not.

When just going from point A to B and not playing tourist, Rest Areas can be fine (it helps if you’re partially deaf). Some states encourage overnights and even have special areas set aside for RVs. Some restrict parking. I’ve never seen it enforced if RoVers are discreet. I’ve talked to cops nationwide. All say they’ve better things to do than roust RoVers unless there’s something else wrong. Restrictions are mainly to keep drug dealers, prostitutes and local riff raff from setting up shop, homeless people from setting up camp, etc. If you don’t act like riff raff or a homeless person, you won’t be treated like one.

Truck stops, malls, restaurants, etc., can be OK. In the big ones, just blend in with the crowd. In smaller ones ask permission. Buy something. Always be discreet! (There’s an old RV story about “permission.” RoVer asks security guard at mall if it’s OK to park overnight. Guard says no. RoVer asks how about all the other RVs parked there. Guard says they didn’t ask.)

Places to avoid: Downtown and many other areas that are fine by day can come alive with druggies and thugs after dark. Church lots used to be OK but now, often have activities at all hours. Any place off the road that’s littered with lots of beer bottles (unless you like to visit with drunken high-school kids and weirdos).

Long Term Independent Parking: Bureau of Land Management (BLM), National Forests, Corps of Engineers, State Parks etc., information is available in great quantity from any number of sources and I’m not going to repeat all that here. Current addresses for obtaining such info appear constantly (with frequent changes) in all RV publications. The important thing is to take the time to gather this material so you know where to go (or not go) and what to expect when you get there. Do a web search for this government info.

Some Points: Paid permits are often required. They’re usually worth it. Some State Park systems have annual permits. The cost keeps increasing, but they’re often well worth it. (New Mexico has one of the best. You could literally spend your life there.) Arizona, Arkansas, Texas are also favorites. In the East, camping parks are always crowded and sites are often unavailable. In the West, except near urban areas and famous tourist attractions, the best sites abound. You don’t want to park in crowded places anyway. (We refer to them, with screaming children, loud music, drunken fights and off-road vehicle noise as ” RV Hell.”) Many places have time limits (at ranger’s discretion). If you’re discreet (Rule #1 again) and keep a tidy site, don’t raise hell or beat your spouse, you can often stay longer.

The very best parking is on private property. Here are some things we’ve done: House/farm/commercial sitting/caretaking. Ads in newspapers, RV pubs, etc. The first time, I just checked with real estate agents and ended up on 5 acres, feeding absentee owners horses and dogs, maintaining pool, keeping eye on house. Got paid well for it and had free electricity. Have done similar in several places.

Selling points are: You’re providing security. You will take care of property and won’t be sleeping in their bed, using their toilet, getting their stove greasy, etc. Just being on a property (especially with a cell phone) makes you most valuable.

If watching property and not doing chores, I’ve only asked for parking plus water and electric. In some cases have paid a dollar a day for each if I felt it was worth it. Have also parked in school yards, on construction sites, at businesses (auto dealers and repair shops — anyplace easily ripped off — are good), private game preserves and shooting clubs. Some security firms (rent a cop outfits) will take you on.

There are lots of broke farmers and just ordinary folks, especially in midwest and west. Your paying $2 a day for parking and water will help feed their kids. I’m well outfitted for dry camping with solar panels and such so don’t need electricity. Usually tell farmer/rancher I prefer to park out on “back 40” for privacy. Find them by going to smallish towns and asking at diners and similar gossip hangouts.

Large commercial farms and ranches in the west have allowed me to park free at wells, stables, feeding stations, etc., just to have someone who can alert them to problems. I have made good friends doing the above. I often volunteer to help when a “third hand” is needed to fix a gate, or whatever. A bit of help in the garden, which is fun anyway, results in more goodies.

Expect to be quizzed and prove your bona fides. People, especially with small children, are leery of possible screwballs or perverts. Having retired military, law enforcement, para-medic or similar ID is great. Clean (not necessarily new) RV is important. So is being properly groomed. NO raggedy-ass beards (tidy is OK), male ear rings (let alone nutty stuff like nose rings), funky clothes (leave cammies in closet or they’ll think you’re a fugitive nut). Keep a tidy camp site! No crap piled up under RV. Pick up trash, even if not yours. It’s easier without a pet. Too bad, but that’s the way it goes. Farmers don’t want your yapping dog upsetting their animals, chasing chickens or biting kids.

Membership Camps can be a good deal, but you have to shop carefully. You can really get ripped off at some. Many are nothing more than affiliations of overcrowded RV parks ( RV Hell again). A few like Camper Ranch Club do have large primitive areas with inexpensive dry camping at some locations.